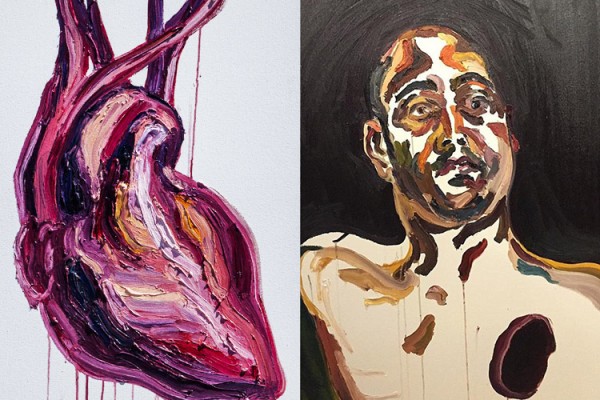 This morning, Myuran Sukumaran was shot to death by firing squad on the island of Nusakambangan in Indonesia. Myuran was a convicted drug smuggler who spent 10 years on death row in Bali.

He was also a rehabilited criminal, who studied fine arts to become an established artist in his own right; someone who could call Australian artist Ben Quilty, one of Australia’s most-popular contemporary artists, among his friends and mentors.

He worked canvases almost right up to his death with his final works rendering bloody holes in his chest, a dangling red heart and finally a swathe of bloody red across a canvas, a work reminiscent of the Indonesian flag.

I cannot begin to imagine the torment from knowing death is imminent and the impact it has on your psyche, the desire to ‘get it over and one with’ intertwined with the drive to survive.

While the media is wringing every last drop of humanity from the story, for me it’s through the art that I think this story is more heart-breakingly wrought.

Many artists have decades to explore their practice and finesse their skills, time to tell their stories and reveal their own torments and joy. Few artists know when they’ll die or how. And even though suicide and accidental death is tragically high among artists, they don’t face such a sharp and clear end-point to their lives.

It would seem art gave Myuran some kind of tortured release from death row, and through his art he helped nurture and rehabilitate other inmates. He is dead now, shot to death, but his art will live on and with it the hope that art can heal and be a catalyst for change. 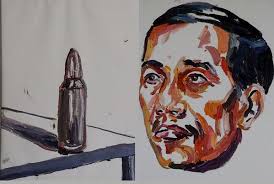 4 thoughts on “#Art and #death by firing squad: Myuran Sukumaran”